This is a Dark Place. Depression is Real. Emerging From Grief Toward Wholeness – Part 5

Managing the loss of someone or something is never easy.  The stages that you go through are difficult and not something anyone enjoys.  For me, one of the most difficult stages of the process was depression.  I’ve struggled with it every time I’ve grieved in my life.  When I think back to my childhood I know I experienced the stages of grief when school was out for the summer and I knew I wouldn’t see my friends until it began again in the fall.  Even then, I can recollect and realize there were forms of depression that I experienced.

The darkness that began with my anger led to what I can only describe as the darkest and loneliest place I have ever been.  I had many dark thoughts in those days.  I realize now that I was depressed.  It wasn’t a fun place to be and the thoughts I had during those times were scary.  I can’t imagine what would have happened had I not had a strong support system around me.  I am fortunate that I have a loving family and many friends that loved and cared for me.  They helped more than I could ever express to them.  Some of them may read these words and not even realize how dark those days were or how their presence in my life made a difference.  Many times it was simply a phone call to say hello or and invite to dinner.

On more than one occasion I wondered what would happen if I just didn’t exist anymore?  I felt like I could no longer take the lies, the deceit, the rejection.  I didn’t want to go on anymore.  I didn’t find joy in anything and all I wanted to do is sleep but, I couldn’t.  Sleeping seemed to awaken the demons and there was sleepless night after sleepless night just being alone with my own thoughts.  Those thoughts more often than not were irrational.  I became just so incredibly exhausted, not just physically but mentally and emotionally as well.  Most days I was just on autopilot.  I knew that was no way to live and I didn’t want to continue to do so.

I am not going to lie.  Depression and loneliness are very dark places to be.  This is difficult to share but I think it is important to so that if others out there are grieving loss and suffering through these stages, and in particular depression, that they know they are not alone.  I don’t believe I was ever close to ending my life but I would be lying if I didn’t admit that the thought of not being alive seemed to be an easy way to make the pain to go away. 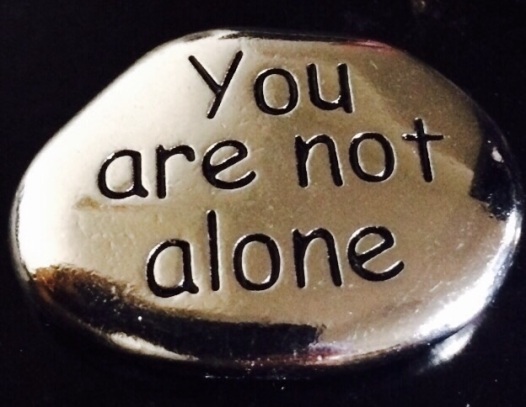 Still, many years later I can remember two very specific moments when I most likely was at my lowest point.  I remember one not so sunny day getting up from my desk at work and walking outside to the river.  I looked down at the river and rocks and then to a train bridge that was near my office.  Would that do the trick?  Just walk out and jump off.  Could that stop the pain, the seemingly never ending torture?  Not today I told myself, maybe tomorrow.  Another time, while on a trip to a friend’s cabin, a place that was usually fun and full of life, family and friends, I remember praying that I would have an accident while skiing and drown.  I just didn’t know what else would stop the hurt and suffering I was feeling.  Thankfully, that prayer was never answered.

Anytime I would have those thoughts I would pray.  I would pray to God that he would take this from me.  That he would show me why this was happening and what I needed to do to become whole again; to find joy in life that I was missing at the time.  Those prayers were answered in the form of my family in particular.  Whenever those dark, heart wrenching thoughts would occur it would always lead back to this:  Would it be fair to my parents, to my siblings and most importantly, to my children?  Absolutely not!  That would then send them through the same terrible issues I was suffering from and would be unfair to them.  I wouldn’t want to do something that was so selfish.  However, there was another issue at play as well and that was that I so wanted to hurt my wife, rip out her heart and soul and make her feel responsible in a way for what I was experiencing.  Would this do it?  Again, it didn’t matter.  It was a selfish thought and although I didn’t realize it at the time, or maybe didn’t want to accept it, I contributed to where I was at as well.

I didn’t want my children to not have a father.  I had so much more to show them, teach them, experience with them, and from which to protect them.  It wasn’t good enough that I was merely still walking and breathing on this earth.  I needed to be real to them.  I needed to be present.  They deserved not only to have a living body that represented their Dad but a living Dad that was present in their life; a Dad that was healthy and there for them in whatever capacity they needed; a Dad that could show joy again.  That life, that vitality, had been stolen away from me and I needed to somehow get it back.

Depression and loneliness are real.  I believe they are just as real as other illnesses.  It is sometimes hard, however, for others in your life to realize it.  It is easy to hide and put on a “happy” face like everything is fine while the whole time you are dying inside.  As I’ve already described, I remember praying that I would just die.  The pain was that intense and I was exhausted – physically, mentally and emotionally.  I just wanted it to end.  I eventually realized that as long as you allow yourself to remain in that type of mindset it isn’t going to end.  The pain is going to remain and in most cases likely become more intense.

So how do you break the cycle?  Get help!  For God’s sake, get help!  Reach out to a friend.  Reach out to a stranger.  Go to a counselor.  It is OK to admit you need help and to ask for it.  It is not a sign of weakness when you do so but rather a sign of strength. I realize it takes tremendous courage to decide to do something about changing your circumstances.  It’s hard, but we are all courageous people.  We all have that strength within us.  The hard part is that eventually, after much time of being in the darkness, we find ourselves comfortable with it.

Comfortable you may ask?  Yes, we tend to stick with what we know.  We all know people that are in situations, relationships, jobs, etc. with which they are not happy.  How often do many of them set out to quickly change their circumstances?  Typically, they will remain there because to do otherwise would cause them to act and by not acting they don’t have to do the work.  Why? Because non-action is easier than the strength it would take to do something.  That, to a large degree, is what being comfortable is all about.  I’m not saying it is a pleasant or desirable state of comfortableness but it is what we know and, pleasant or not, it is comfortable nonetheless to the person involved.

Eventually it becomes easy to just remain where we are.  It just seems like it would take a lot less work and energy so we accept that this may be as good as it’s going to get.  However, it’s not as good as it’s going to get.  There is so much more if you just have the strength and the courage to take that first step.  It really starts with a decision.  The decision that you are good and you are worthy not to remain where you are.  God created you in His image.  You are a prized possession in His eyes as well as all those in your life.  You matter and are deserving of joy.  All it takes is one decision to act.  One simple step.  Once you do that you will find that it isn’t so bad and that it becomes easier to take every subsequent step.  Soon, you will find that joy again and discover that you don’t have to languish alone and in the dark with your sorrow.  Just do something.  Reach out to someone.  If you don’t have anyone to reach out to reach out to me.  I’ll help you get started.

Be Great!  Be Strong!

If you enjoyed this post, please use the buttons below to share it on social media and enter your email address to be notified when new content is published!

4 Responses to This is a Dark Place. Depression is Real. Emerging From Grief Toward Wholeness – Part 5