Often in life we set out to do things with high expectations of the results.  Many times we are convinced what the final outcome will be and of the path we will take to get there.  It is easy to get frustrated or feel defeated when it doesn’t go as expected.  Often, what we envision as the final result doesn’t resemble what actually happens.  We put in the hard work and unfortunately sometimes things out of our control affect our journey and the finished product isn’t quite what we pictured in our mind.  Even when that happens, if you honestly put in a strong effort and gave it all you have it’s still a win.  It’s still a victory!

This past weekend I experienced something that I never have since I began running races.  The weather conditions caused the race to be black flagged because of high heat and humidity.  Many competitors were either forced to stop, diverted to a different course or forced to turn around and shorten the distance they had planned to complete.  I had run races in the past that were more extreme as far as heat and humidity were concerned but the difference was that I had never seen the number of people collapse during those races that I did in this one.

The medical personnel had to be overwhelmed by the amount of people needing assistance.  I am sure many of those competitors were sure they were fine right up until they weren’t.  I never felt that I was ever in any danger of needing assistance and truth be told, if allowed, I would have completed the full course.  Would that have been a wise decision on my part?  We will never know.  What I do know is that the race director, medical team, local officials and first responders were handed an impossible task.  They knew the time and amount of hard work all the competitors put in for that day.  They had to make a tough decision and in the end I believe they made the right one.

If you are a runner then you surely understand the crazy mentality I talk about when I say there is nothing that will stop us from finishing if it were up to us.  We train for and are programmed to ignore pain and suffering.  It is what allows us, as endurance athletes, to compete for such long periods of time under, many times, less than ideal circumstances.  We certainly are a stubborn bunch.  I would not have wanted to be one of the many race officials or police officers that had to break the news to many that there was a change in plans; that the race they intended to complete was just not possible that day.  After months and months of dedication and training those are words that just don’t compute for many of us, myself included.

I was one of those runners that ran through, not one, but multiple attempts to get me to turn around and backtrack to the finish.  I encouraged my friend and partner in crime on the run to do the same and we did until it was pretty evident that if we did continue and got into trouble there very well may not be anyone available to help us.  It was disappointing for sure and not something we wanted to give in to. 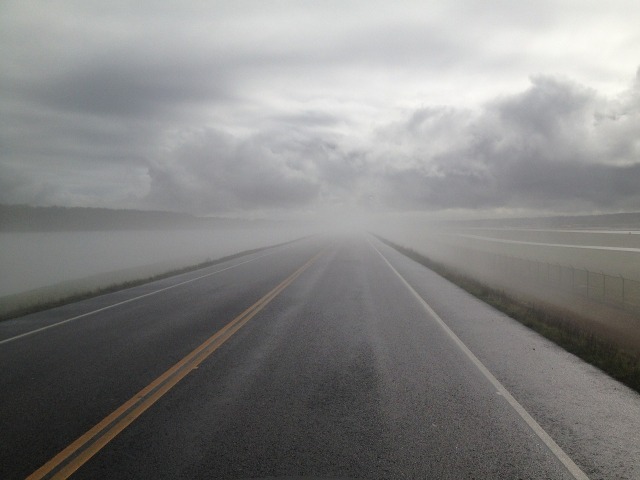 There were many competitors that were visibly upset on the course and, while I understand their frustration, I believe that the decisions were made for the good of everyone.  Those decisions may have been difficult to accept but they were the correct ones.  It is frustrating when things don’t go your way.  However, some of the things I witnessed on the course made it justifiable.  I had never seen that many people laying on a course getting assistance.  One was as early as just five miles into the race.  That young woman didn’t look good and I hope and pray that she is well.  After we finished I heard many complaints and it would have been easy to complain right along with them.  However, we had a good run, and when we crossed the finish line I am sure we had put forth effort that probably exceeded what we would have in good conditions for the full race.  Above all we were safe.  I am grateful for that and the experience.

After the race we received word that not everyone was as fortunate as we were.  A young man passed away on the course that day.  I am sure he was doing what he loved but that is an incredibly unbelievable price to pay for it.  I pray for him and his family in this profound time of loss.

There were many memorable moments along the course that didn’t involve pain, suffering or disappointment. One that stands out is a husband that was holding up a sign waiting for his wife to pass by.  When he saw her he started screaming how wonderful she was doing and how fabulous she looked!  I mean really screaming!  At the sound of his booming pride for his wife it seemed that all the other noise on the course ceased to exist.  He didn’t stop there. He chased her for a couple blocks emphatically screaming his praises.  What an incredible gift to give her; acknowledgment of her hard work and dedication – a genuine reflection of his love for her.  I’m sure he boosted her spirits and desire to do well.  He had that effect as well on many of us that witnessed his support.

We all run for different reasons but in the end it is the finish, the feeling of triumph, that we do it for.  In anything we do in life we all measure that satisfaction in different ways.  When we eventually got turned around there was an older gentleman that yelled out to the policeman, “Do I still get my medal and jacket?”   Before he would alter his own plan he needed assurance that his effort would be acknowledged and rewarded.  For him, he needed that medal and jacket as a symbol of what he set out to do and the dedication it took regardless of the conditions.  It didn’t matter if his original plan was altered; he was still going to finish even though the path to get there had changed.

And so it is with life.  We often have so much we desire, so much we want, and we work hard to achieve it.  That achievement may be represented by a medal or a jacket.  It is captured in the screams of excitement from your spouse or parents about how great you are doing.  It’s that message at the end of a tireless effort that leaves you speechless and in tears.   Many times it may be as simple as that little space inside you that smiles a little bigger when you lay your head down on the pillow at the end of a long day.  At those moments we have the joy of knowing that tomorrow there will be another race to run, another moment with a loved one, another goal to achieve.  No matter what it is, we will be better for it regardless if there is a medal or jacket waiting at the end for us.   That feeling, that satisfaction, is something no one can take from us even if our course to get there is altered.

Be Great! Be Strong! Be Determined!

If you enjoyed this post, please use the buttons below to share it on social media and enter your email address to be notified when new content is published!